1st Official Presentation for Participants of the Swimrun Lanzarote 2018

On the 26th June afternoon, we gave the kick-off to Swimrun Lanzarote 2018 by Centro Deportivo Fariones (By PY Hotels & Resorts), with its official presentation for participants in the “CÉSAR MANRIQUE” lounge´s into Real Club Náutico de Arrecife.

At 20h, as in a meeting between friends and the spirit that accompanies this magnificent sport, we discover the news that this 2018 entails for this fantastic, young and energy overflowing race.

The GREAT news… something we can be proud of, is the introduction of SRLZT in a new national project, HEAD SWIMRUN SERIES by GARMIN, that for first time includes the 7 most powerful and spectacular races of the national territory and Andorra; where we will have the pleasure to be the finish race of this, and know the winners of the prizes valued at more than 14.000€, which will be distributed among the champions. 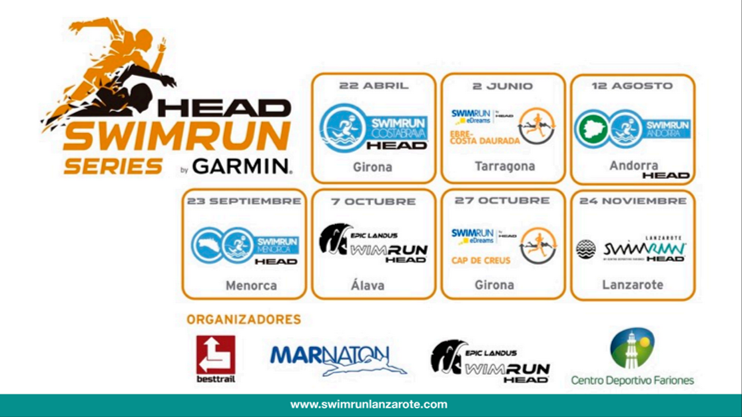 Technically information, after listening to the requests of those first brave who faced the 2017 edition, and wanting to make known this spectacular sport, we will adapt SRLzt for everyone in our second year!

Also, they not only have the option to proclaim champions in each of the competitions and their three combinations of partners (female, male & mixed), but we create category by age, where everyone has a place, being the oldest participant who marks this.

And we could not forget the little braves, for the first time we created CHINIJOS (KIDS in Canarian!) category, that they run on the 23th of November afternoon in Playa Grande, with the final purpose to bring a new sports experiences to the little ones, adapting the circuit and the distance for the different categories: 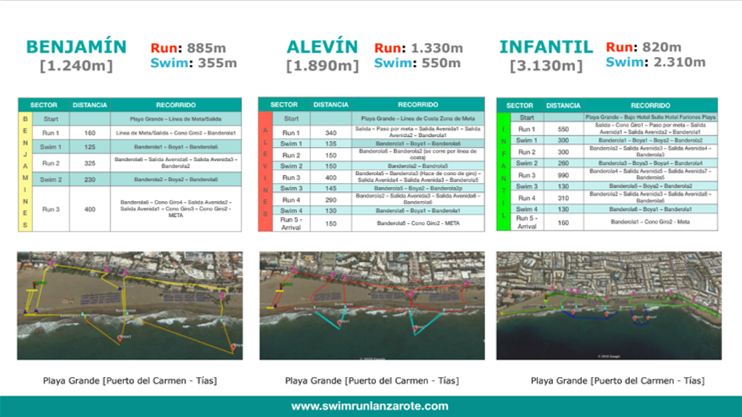 Maybe the most expected moment in the afternoon, and where we could see more faces of enthusiasm, adrenaline and desire to put on their sneakers and swimming goggles, was when our Race Director Amalia Calviño, revealed to those presents the spectacular Marathon distance circuit that will join in 13 sectors of running (33.7km), and 12 of swimming (5,883m), four of the seven municipalities of the island (Teguise, Arrecife, San Bartolomé y Tías); starting in the Castillo de Santa Bárbara en Teguise, in Teguise, and finishing up in the golden sand of Playa Grande in Puerto del Carmen (Tías), next to the Suite Hotel Fariones Playa.

Along the its 40km, will unite emblematic places such as Las Cucharas, Las Caletas, La Rocar, el Castilllo de San José en Arrecife, El Cable, Playa Honda and so on until completing its route ending by crossing the transparent waters of our great Atlantic Ocean, to the sports beach par excellence, such as Playa Grande, which once again hosts the finish line of a competition on the island. 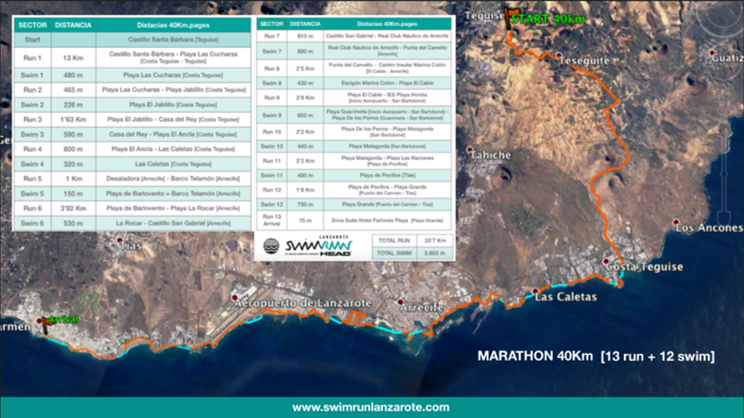 Someone had to shrink his heart when they listened the description of the SPRINT; race; a route that they could feel in their skin the last year, and with a little change, for adding some more stretch of land and cut some stretch of water, that demanded all the effort, strength and courage during 2017; maintains the initial essence of Swimrun Lanzarote, and therefore it´s the distance chosen by Head Swimrun Series by Garmin, to complete with its score, its final classification. 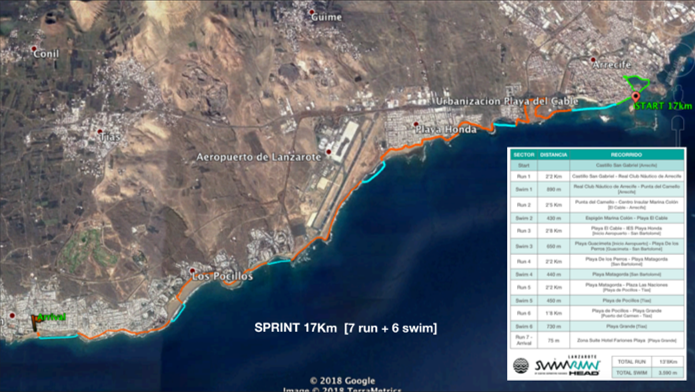 With the start line in the Castillo de San José in the capital of the island, its 17km distributed in 13.8km of runway (7 sectors) and 3,590m of water (6 sectors), becomes the great competitive attraction of the weekend, as their competitors will fight every meter flying over land and sea, for becoming the first champions of the Head Swimrun Series by Garmin.

And last but not least, we presented as another new the STARTER race,a competition with a inclusive character, with the intention of reaching everyone and allow them to feel the essence and values of humility, companionship, care of the environment and its people, that offer Swimrun competition and its ambience.

The “little one” of the day covers 8km of coastline by sea and land, divided into 6.9km of running (4 sectors) and 1,620m of swimming (3 sectors), that join from Playa de Guacimeta (San Bartolomé), to the Playa Grande beach in Puerto del Carmen. 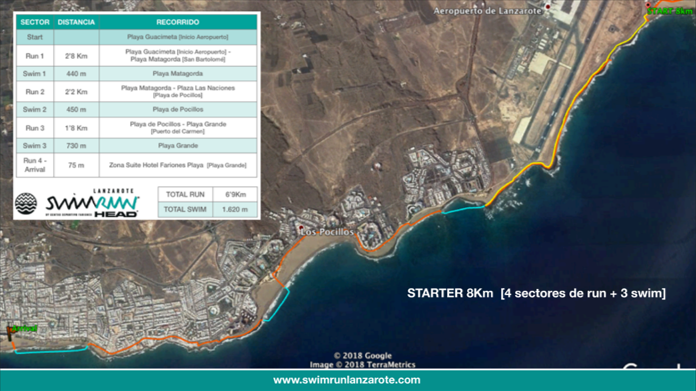 Once the technical presentation of the competition was finished, details were revealed like the inscription pack, services that will be available the day of the race both the runners (showers, physiotherapy, wardrobe, party race, transport to start line, etc.), and companions (children animation during the race, party race, etc.); but if you could not attend, don´t worried, we publish soon all the information in the web www.swimrunlanzarote.com and social media.

We didn´t want to finish, without motivate and raise awareness of the need to keep the world and our oceans free of plastics, so from Head Swimrun Lanzarote by Centro Deportivo Fariones, in this edition and under the commitment #cleanoceanproject will force each swimrunners to carry a collapsible and reusable cup for use during the competition in the energy station.